by Helder Lopes, Art VP of Design and Animation at Outfit7

Talking Tom Gold Run reached the number 1 spot in the games category across app stores in 137 countries. But it took a staff of 80 people working for 8 months to transform Gold Run from an initial sketch on a whiteboard to a dynamic game that earned 34 million downloads within its first month.

When we first conceptualized Gold Run, we had a few things set in stone: it was going to feature one of our star Talking Tom and Friends characters, it was going to be an “endless runner” game, it would include some sort of building system, and we wanted it to be a best-seller. At the time, we didn’t even know if Tom was running in the game because he was chasing something, or because he was being chased himself!

In order to attract a broad audience, the game needed to be engaging and injected with fun and humor. This blend of characteristics appeals to everyone from grandparents to their grandchildren. The art was developed simultaneously with the main story, each team feeding off each other creatively. Our years of experience developing and releasing top charting games have taught us that our rigorous design process is actually key to a game’s success.

As game artists, we are always learning and growing, and we take lessons from every development experience and incorporate them into the next game. Here are some exclusive takeaways.

Talking Tom Gold Run was always meant to have its own style. At the time we had two Tom designs to choose from: the original design from My Talking Tom, which we called T3, and a more stylized version we called T4, which was only used in video content (not in games up to that point). Neither had the exact look we wanted, so we designed a new look for Tom that sat somewhere in between. 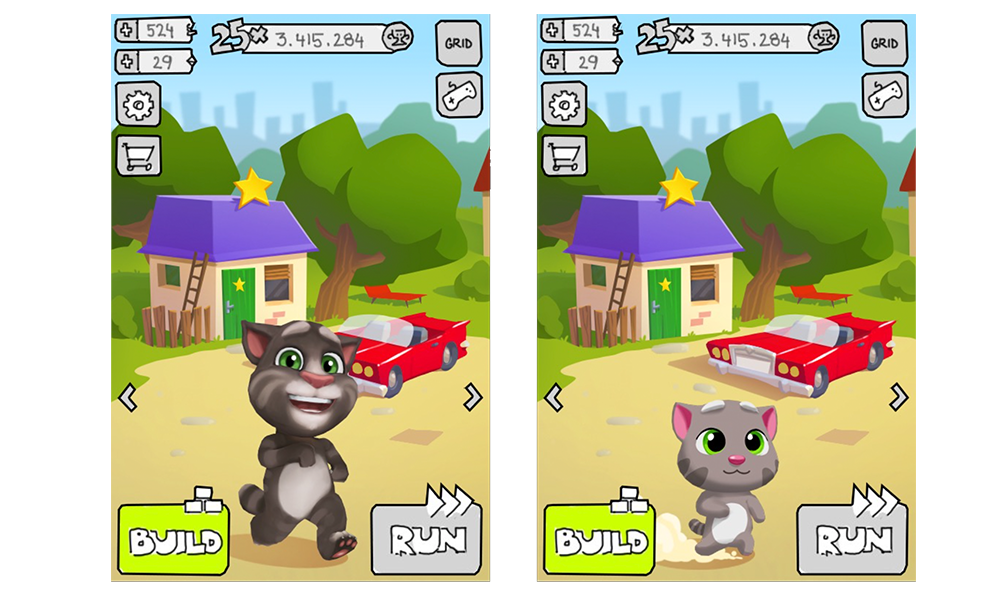 In the end, Gold Run’s game art is somewhere in the middle. Cute and stylized, but not too childish, and recognizable to fans.

Down to the details

Players don’t look at any single screen of Gold Run gameplay for more than a few seconds—so it’s imperative that the game communicates everything players need to know within that short window.

Every leg of the course began as a sketch that was colorized and then modeled in 3D. We spent hours going through the course frame by frame, determining how obstacles should be spaced, whether the player could catch a glimpse of the robber during a sharp turn, and which camera angle would best convey the next step to the player. Every item that you see in the game first started with a sketch and went through dozens of design iterations. 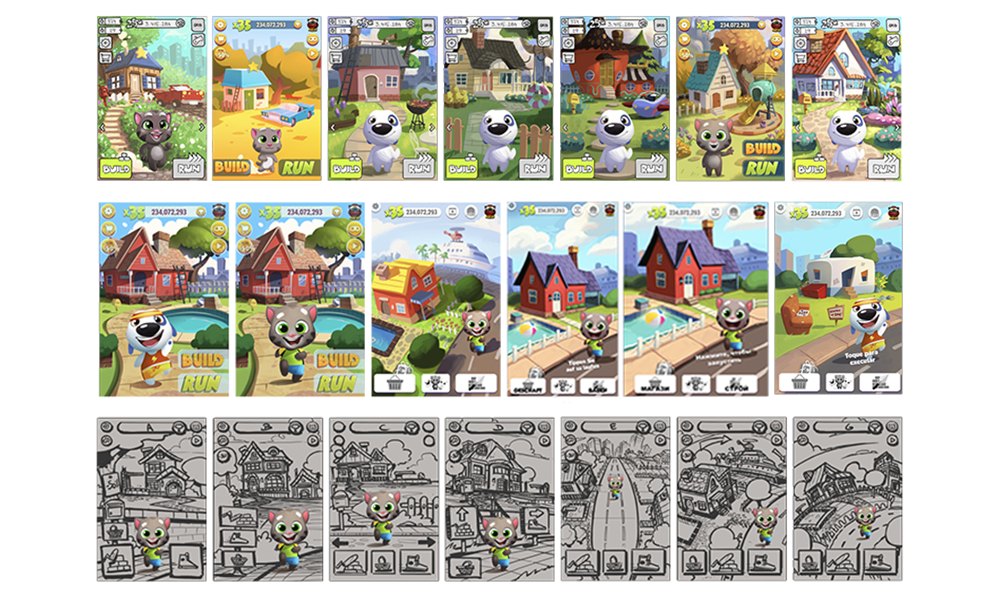 Some of the concepts in the game today, such as the airplane power-up, are from those initial sketches on paper or on a whiteboard. Others, like the helmet power-up, have gone through dozens of iterations (In fact, the helmet began as a blue bucket you put on your head!). The goal of our art and animation departments was to make sure every in-game item was instantly recognizable, so players would immediately get hooked on the game. And stay hooked! We pay attention to every last detail so the player doesn’t have to.

During this process, our artists created as many as 20 different sketches for each section of the course, each member of the team working to polish the art to perfection. As with all of our games, our goal is quality over quantity: no matter how many iterations an image goes through, our artists don’t give up until it’s perfect. Working in this level of detail took a lot of effort from all team members, but the reward of getting it right was worth it. We can confidently say that its game art is one of the crucial reasons why millions of users enjoy this game every day.