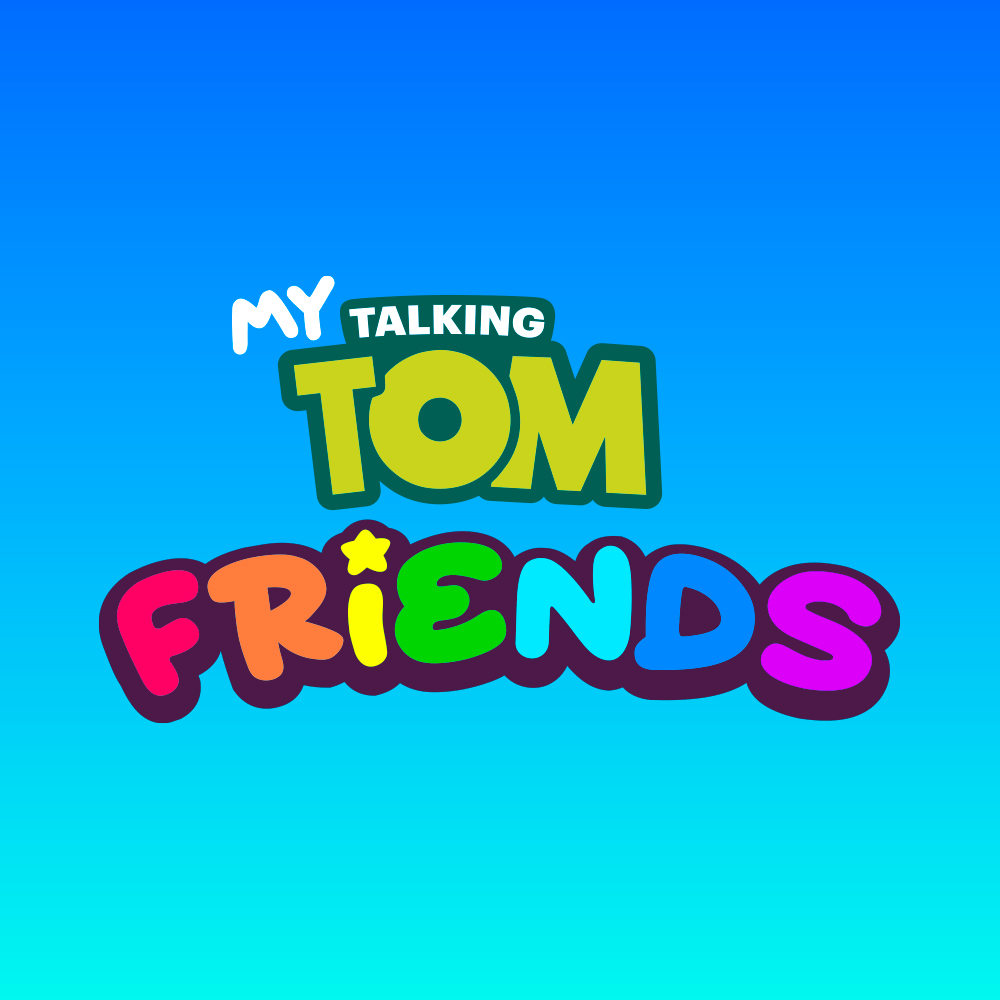 By Barbara Erman, Eran Alboher and Nik Lorbeg, aka the team that started it all

Each of our characters has shown they can entertain our users on their own. So how much fun would it be to bring them all together? We’ve been thinking about this idea for years and finally decided to go for it in September 2018. Fast forward to today and we’ve just launched our most ambitious game yet – My Talking Tom Friends (MTTF).

We knew this one would be a special kind of challenge. Our flagship virtual pet games so far have all been solo. Now we’ve got a whole party going on inside one game! And it never stops – from the moment you open our game, the fun goes on and on, because we’ve created a world where our characters take on a life of their own. But we’ll get to game engines and behavior algorithms soon enough. First, let’s take a look at how all this started.

When I started putting together the idea for My Talking Tom Friends, it was clear to me that the space where the characters are located would be one of our main challenges. That seems like a no-brainer when you’re going from making virtual pet games with one character to putting six in one game.

Every single detail of this world would have to be thought out in depth or things could get real messy real quick. I already had a good idea of where I wanted to take the game, but would it even be feasible? Or would six friends turn out to be too much for one house?

Well my fears turned out to be totally unfounded. The first meeting I had with Eran, our art director, and Nik, our UX designer, set the tone for the entire project – people coming up with ideas that turn complex challenges into simple solutions.

We had a fifteen-minute meeting, during which Eran pulled out his sketch pad and already started drawing what we were talking about. After that initial meeting, we already had this rough draft: 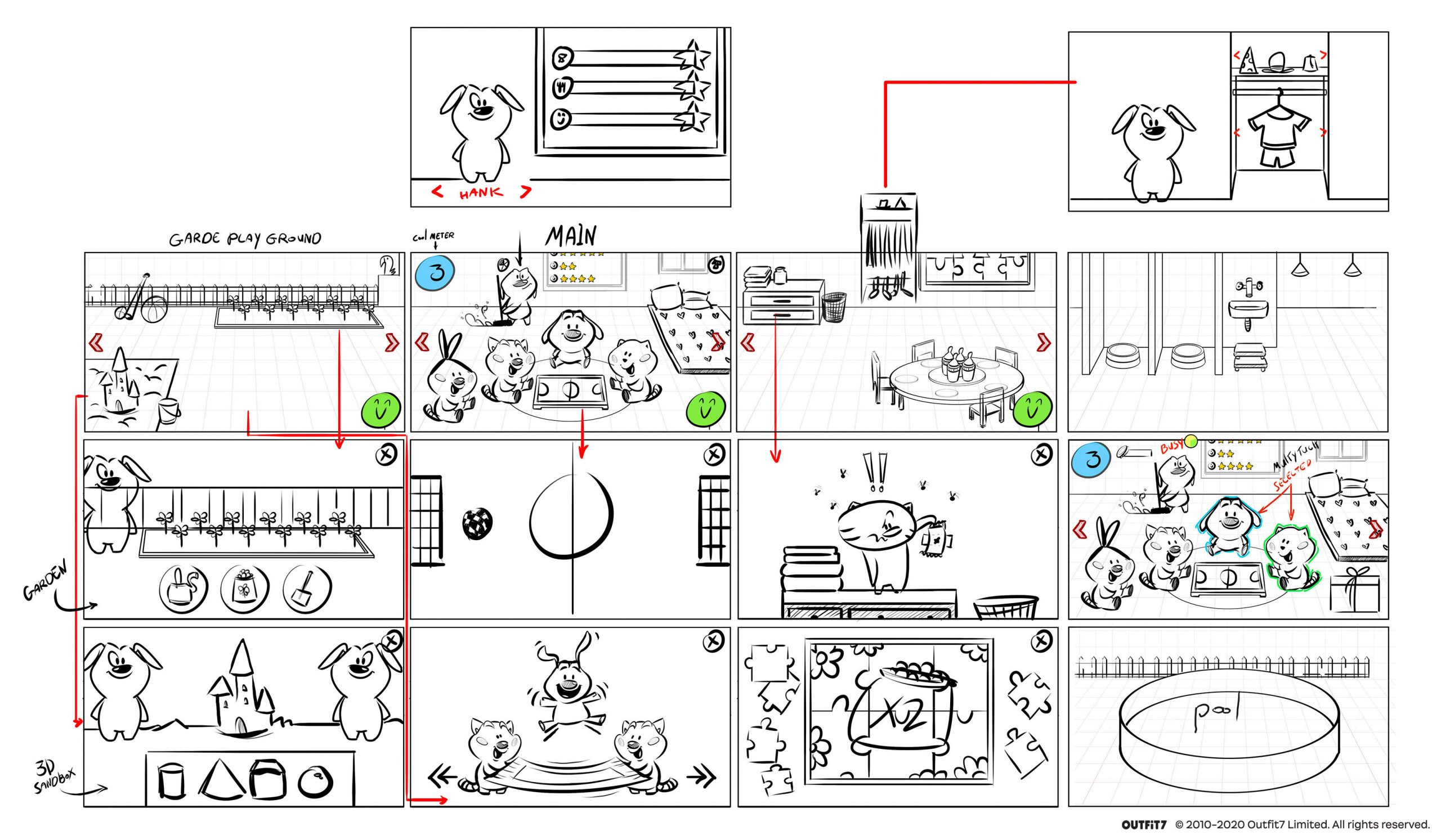 If you open the game today, you’ll easily recognize pretty much everything from this first sketch. And that’s one of the most amazing things about this game for me. The vision from everyone on our team was so strong and well aligned that the initial ideas translated into the game in a totally organic way. And, as anyone who’s worked on large game projects can tell you, that’s not usually the case!

Three weeks later, we already had this drawing of the MTTF house:

That’s not to say there weren’t challenges in creating the game world. For example, we figured out the beds are taking up too much space (see picture above). So we made a sort of crevice in the wall and pushed them in to allow our characters to move more freely. That tweak actually saved us a lot of headache down the line, because things like this get much harder to change once the game is already built!

To give an example of how little details in the environment can impact game mechanics: you’ll notice that the sketches above had four chairs around the table and plates on it. We were worried that putting in six chairs would take up too much space, but figured out that it actually allows the characters to have more different interactions together. On the other hand, the plates on the table turned out to be a sort of limiting factor, so we swapped them with just one big basket of food in the middle of the table to indicate that the food is there, but you have to click on it first. Oh, and we added more chairs!

Fun is the goal and trust is how we get there

When we were making MTTF, we decided not to say no. To anything. Every challenge we had and every wild idea we came up with was met with enthusiasm and positivity. And, most importantly, with trust from the rest of the team that we’d get it right if we get the chance to do it our way. A great example of this is the weather in the game.

Weather is one of the things I’ve wanted to put into our games for a while now. We’ve talked about it a lot on previous projects, but we always decided to cut it out at the end. We’ve had things like leaves blowing in the wind before, but not full blown day/night or sunshine/rain. Well this time we decided to just go for it!

The results speak for themselves. I remember coming to the office when we were doing internal testing for the game and hearing people basically shout: “OMG, IT’S RAINING!” It’s something that seems so organic in the game, but really takes you by surprise, because it’s a level of detail you just don’t see on mobile. Keep in mind that the end product is a game that has to fit in less than 150 megabytes of data, so little things like weather often don’t make it in the final product.

On the other hand, this kind of spice is what creates what we call the liveness of the game. It’s not something that impacts the mechanics or really changes the way you play, but it is one of the main things that make our games so fun! Because we don’t want our users to just do a bunch of actions and that’s it. We want them to fall in love with the world we’ve built for them. And we focus on every single detail to make that happen.

This is easy to do when you have trust from your leaders. There wasn’t a single art challenge in this game that wouldn’t be left to the artists to solve the way we wanted to solve it. There were no boundaries, just a strong vision and a commitment to give everyone the opportunity to explore with an open mind.

I’ve worked on 5 or 6 virtual pet games before this one, so the experience was already there, the ideas were based on knowledge of both what we wanted to achieve with this game and what we already know our users love from previous projects. That gave me and the rest of the artists working with me the confidence to come up with solutions and stick to them. When you’re working with people that trust what you’re doing and let you take ownership of your area, it all just comes together naturally.

Balancing player interactions and spicing it up with algorithms

The challenge with having 6 characters that you can interact with in one game is finding a balance between three types of interactions:

We were already very familiar with the first type: player-character interactions. This is the main type of interaction in all our virtual pet games. It refers to personal and emotional interactions that require a lot of the player’s attention. Feeding the characters, dressing them up, taking care of them in general. It’s basically when you’ve got one on one interactions with a character.

The second type of interactions have a wider scope – I like to call it “god mode”. That’s when you move characters around by dragging and dropping them, replacing furniture, giving them toys to play with, making them socialize and so on. If the first type of interaction was mostly the same here as in our other games, this type took a lot more work to create a balanced experience despite the massive amount of options and combinations.

The third type is what we call player-game interaction. That’s the part of the game where the focus isn’t on the characters. It’s all the minigames and toys that are there primarily to satisfy the player’s need for fun and give the game added diversity.

Some of the challenges we faced when balancing all these different interactions were new to us, but we solved them by following the same creative process we’ve learned to rely on: ideation, prototyping, testing, iteration. We do this for every single feature in all of our games. But if there’s one thing I’d emphasize about MTTF it’s that we were able to iterate really, really fast. We even came up with a motto: “don’t irritate, iterate!”

Once we had all the interaction types down and balanced, the challenge turned to making sure our users will be able to understand it all. That’s where I think we did a great job with the tutorial this time around. Tutorials are super important because they are the first thing a player interacts with in the game and can be the difference between a happy player or a churned one.

We tested our games without tutorials a couple times before, but it proved that players need contextual guidance, especially if there are a lot of features and interaction types in the game. On the other hand, if the tutorial is too in-depth, they might give up on the game before they even get started!

Once we went through a few iterations of the tutorial the results of our tests started coming back really great. We built a complex web of actions composed of three distinct interaction types, but managed to balance and explain it all in a way that felt intuitive for our users! But there was one more challenge to solve: player interactions weren’t going to be enough this time.

There’s no way you can play with six characters at the same time. So we had to give them a high level of autonomy. For this game to reach its maximum fun potential, we had to give each character a life of their own and have most of the interactions happen automatically, without the user’s input.

Our devs made this happen by creating a brand new behavior algorithm based on something called utility theory. The result is a game that can basically play itself. Sure, the characters will still need you to help them out quite a bit, we don’t want to cut the user out from the action, but the system we’ve created for MTTF allows new stories to unfold on their own. As soon as you open the game, fun starts happening and no two sessions are the same. But I’ll let our devs get into more detail in the second part of this article, which will be about the technical side of turning our most ambitious idea ever into reality.

So stay tuned for part 2 of this Behind the Fun series about our journey to create a next-generation virtual pet game with My Talking Tom Friends! We’ll update this article with the link and share it on our LinkedIn page once the second article is live. Until then, download MTTF for iOS or Android and have fun!