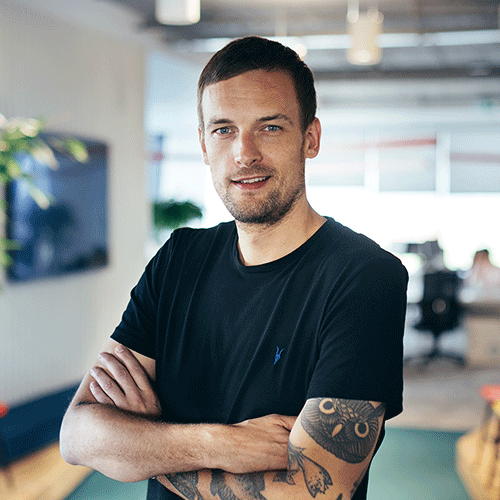 When I came to the Outfit7 offices for my first interview back in 2014 and saw the colorful cat characters pasted on the walls, my first thought was: no way! A few weeks later, I was the new head of design. Today, I run our Barcelona studio.

I’m the kind of guy who likes wearing black and white, I don’t have a family and don’t even have any pets. This environment felt way too positive and fun-oriented for me. I took the job interview because I was referred by a friend but I was skeptical, to say the least.

However, I’ve always been attracted to gaming and at this stage of my career I was determined to prove myself as a senior professional who can deliver results in any environment. As it turns out, this isn’t just any environment, though!

When I came on board as head of design, my team was just 3 designers that almost exclusively focused on licensing. My mission was to build an autonomous team with its own know-how that isn’t just a complement to the game development team, but an equal partner.

Within a year, my department had grown to 12 people. Where once there were only designers, now there was a balanced independent team with its own management structure. We started autonomously creating graphics and running dozens of app store optimization tests to figure out exactly what works for our target audience. By the time I left the Ljubljana offices to run our new Barcelona studio, there were 22 of us working like a well-oiled multidisciplinary machine.

I was able to succeed on my mission as head of design, because the people at Outfit7 respected my ideas and gave me the opportunity to make them a reality. The direction I took my team in was a lot different from what management had planned when they recruited me. But they let me do my thing and live with the results. It was a pretty sweet thing to live with though, as we got app store conversions to skyrocket.

However, it wasn’t just that I brought something new to the team. I became a different person myself. I felt that something was different at this company from the beginning, but I couldn’t really pinpoint what it was until I saw how excited my new Barcelona team was after visiting the offices in Ljubljana. The culture at Outfit7 is incredibly strong – there’s a lot of honesty, everyone has to take responsibility, but we always support each other, no matter what your job is, what lifestyle you choose or your character. It’s infectious and, after a while, you just become a part of the family.

When Outfit7 decided to open a new studio in Barcelona, I knew that was my next step. We were looking for a GM internally first and I decided I wanted to be that guy. I knew that going from leading a design team to creating a semi-independent game studio would be another life-changing challenge for me. But I wanted that challenge.

I’m not going to lie and say it was easy. Moving away from my home country and all of my friends was one of the hardest things I’ve ever done. I was the only one who came over from Ljubljana and had to put all of my energy into building my team and getting the new studio off the ground. However, seeing the studio grow around me as a direct result of my work is incredibly rewarding. There was never a moment when I regretted my decision to take on this new challenge. Especially because of the strong support Outfit7 has for what I’m doing here.

My vision for Barcelona is to create an autonomous game studio that will always only focus on one project at a time. For senior pros in the gaming industry, that’s a wet dream come true. A problem with working for a big studio is that you eventually have to juggle a number of projects and you lose the connection with the individual games you’re working on. When you can’t directly see the results of your work, it can be hard to stay creative. In our Barcelona studio, I want to do things differently.

Sure, I’m in charge, but I’m not telling anyone what to do. To create a strong foundation, I started out by only hiring senior professionals. So I’m not the expert here, everyone is the expert in their own field. My job is to make sure they have the best possible work environment, respect their knowledge and trust them to make the right choices. Since I’m a bit of a control freak, that was a challenge for me. But I’m certain that it’s the right approach and the results are already showing.

Our new studio opened at the beginning of 2019. We’ve been working on our first game for six months now, exploring new mechanics that we haven’t worked with before and really trying to create something fresh. It feels sort of like learning to walk again, both in terms of working with unfamiliar mechanics and discovering how a bunch of seasoned vets fit together. But we just completed the first round of user testing for our game and the results showed we’re definitely on the right path.

It wasn’t all me though, far from it. We have a lot of support from Ljubljana, especially the HR department. We’re transferring knowledge to our new studio every day and my team already embraced the Outfit7 culture! I guess that’s really the main thing I brought with me to Barcelona – our values, attitude and ability to talk openly.

It’s worked great so far and we’re confident we’ve got a very special new game up our sleeves. The new studio is still in its early stages, but our future definitely looks bright. I believe the reason we’re doing well is that it’s both my personal mission and the company’s goal to create the best work environment in Barcelona. Because that’s what it takes to create the best games.