How I went from lone wolf to team player 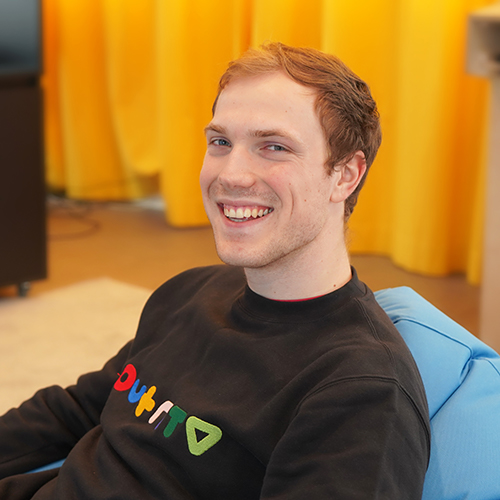 When I look back, it’s mind-blowing how much we did!

We went from brainstorming ideas and building a prototype, to polishing and delivering the final product, all in what seemed like no time at all. And we were working in teams of just five or six people.

This experience at Talent Camp 2015 was my first taste of what it’s like to work in a real game studio. Before that I’d attended programming summer schools as a kid, and I’d tried competitive programming and fiddling with Unity and Unreal when I’d got a bit older. But when I came to Talent Camp, a whole new world opened up to me. The Talent Camp Mentors introduced me to the whole Slovenian game development scene, which is something I’m now heavily involved with and love being a part of.

For me, this was the first of many awesome things that started with Talent Camp.

In fact, I enjoyed Talent Camp so much the first time that I participated again the following year. And I was going to apply for third year running but – thanks to a bit of patience, persistence, and luck – I got hired instead, which was even better!

Now I work as a Junior Software Engineer at the Outfit7 Group – full-time during the summer, and part-time during the college semester. When I started working here, I was always “the dumbest person in the room”. Around me were all these senior programmers, artists, and producers, each with a proven track record of creating hugely successful games, and I was absorbing all this knowledge like a sponge. I’ve learned so much here already.

Now that I’ve been working here a while, I can say for sure that Talent Camp really did give me first-hand experience of what it’s like to work in a real game development studio. During the event, you work with the same editors and tools, you implement features, you have deadlines, you need to debug and fix stuff. It’s all the same. We were there for eight hours a day, and not just playing around. And the best thing was, we never had any constraints regarding what we could do.

You also learn how important it is not just to play to your individual strengths, but also to collaborate and work as a team. We programmers are generally “lone wolves”. And when we do form groups, we tend to form them with other programmers. So it’s been fascinating for me to discover that artists, game designers, and producers have completely different minds to my own.

That means that on every game project, there are a lot of different opinions, and it’s a challenge to communicate effectively and work out those differences. It’s so crucial to expand your horizons and see how other people think. You can be the best guy in the world, but if you don’t know how to communicate your ideas to someone else, you will fail. Your project will fail.

But overcoming that challenge is incredibly rewarding because you end up forming such strong working relationships. It’s really fascinating how we humans can bond over something like a game development project. You definitely build more of a connection than if you’re just hanging out or partying, or something like that.

And now, having gained so much from Talent Camp already, I have the opportunity to participate as a Mentor. But that doesn’t mean I’m done learning – far from it. See, when you explain something, you also get a better grasp of the topic for yourself. When you give a simple example, you really start to get the fundamentals and basics of what you’re talking about. You have to! So the more you share your own knowledge, the more you reinforce and improve it too.

One of the best learning experiences I’ve had was giving a long presentation at a kids’ game development workshop set up at the Outfit7 Group offices in Ljubljana. Right after my presentation, one girl came up to me and said, “Hey, Mr. Rok. You said ‘um…’ seventy times!”

I was speechless at first, but then I said, “Thank you very much for paying attention. I’ll try better next time.” So, yes, I’m improving my rhetorical skills along with everything else!

But no matter who I’m mentoring, teaching or “jamming” with, no matter what their age, I think of them as people who are just like I was a few years ago (like I still am, really). And it’s just great to inspire them and to show them what they can become – that they can be game makers too!

To keep growing, I had to switch careers.
But not companies.

I moved halfway across the world, ran into a pandemic and it turned out great!

How I went from lone wolf to team player

My Journey to Becoming a Proper Software Engineer

Being a Game Writer is a Whole Different Ball Game!

We don’t compromise, especially when hiring!