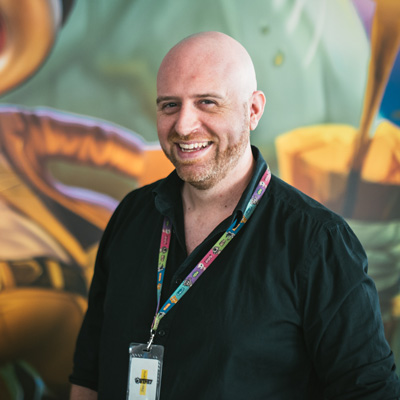 I have the best job in the world. There, I said it. But what else would you call a job where you get paid to play games every day? For me, working in the gaming industry is a dream come true. I’m one of those “digital gaming babies.“ Games have always been my passion. But I didn’t know working in the industry could be like this; when I got started, the values and the culture at Outfit7 were unlike anything I’d ever seen before. Everyone worked towards a common goal – to create the best gaming apps. The energy around that was mind blowing.

I joined Outfit7 Group back in 2014, when the company was still small. It was the best decision I ever made – and my biggest professional and personal challenge by far. It was just after the release of My Talking Tom, which skyrocketed Outfit7 into stratospheric levels of success. The company was fast becoming one of the leading casual game creators.

My main task was to bring new and improved processes to the QA department. Now, I grew up knowing pretty much everything about desktop games, but when it came to understanding the specifics and the scale of the mobile industry? Well, that was a challenge. I wanted to make sure that the end user got the best possible experience playing our games, so I had to figure out new ways of testing the game and handling the variety of different devices. From the very beginning, my idea was to include the QA department from day one of the development process of every product. We wanted to go beyond ‘normal’ QA, we wanted to give our users a voice, let them have a direct influence on the product. Looking back today, I think we can say we succeeded.

I encountered some personal challenges too in those early days. I had to build the team from scratch and figure out how to motivate them. Luckily for me, mentorship is strong at Outfit7. Ultimately, what helped me the most was the mentorship I received from Luka Renko, VP of Tech, and Miha Obal, the Senior Director of QA here at Ekipa2. Leading by example, they showed me how to build trust and responsibility within the team, and gave me lots of amazing advice that I was able to pass on to my team. My management style and abilities evolved and developed more than I can say at Outfit7 – it’s been quite a ride!

The first app launch I was responsible for as a QA lead was My Talking Angela. To be honest, it was hard work and we worked long hours, but we really wanted the app to be perfect for our users. And, let me tell you, the beer that we drank after that app launched tasted amazing –  no other beer had ever tasted so good. After all those long hours of work we put in, we were able to kick back and drink ice cold beer together and laugh our asses off. We were proud of what we had worked so hard to do – the app was a job well done, and one well worth raising a glass (or two) to.

I have the best job in the world. Of course, not every day is all sunshine and beer. But for me, the fact that I’m happy to come into work every morning and that I can’t imagine working with any other team is as close to perfect as it gets.