Family entertainment company Outfit7 Limited adds another impressive accolade to its legacy, as it announces that it’s Talking Angela channel has received the Diamond Creator Award from YouTube. The highly coveted award is given when a channel reaches the impressive milestone of 10 million subscribers. This is the third Outfit7 channel to achieve the Diamond Creator Award to date. 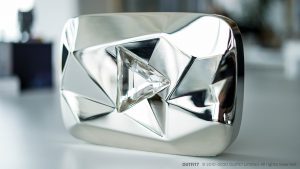 The awards are further confirmation of the incredible popularity of Outfit7’s channels. Combined, they have over 35 billion views and more than 61 million YouTube subscribers to date. And the success shows no sign of slowing down. In July 2020, the company reported over 67 million views across its channels in just one day, a new record for the brand.

The Talking Tom channel, which also has a Diamond Creator Award, is a particular standout. It’s been Number 1 in YouTube’s family entertainment category for the past three months, according to Tubular Labs. It also consistently ranks among the Top 50 most viewed channels in the world*.

The other Outfit7 channel with a YouTube diamond is Talking Tom and Friends, which hosts the franchise’s popular animated series. The series is currently the 9th most in-demand family show online on the planet, with 7.1 times the demand against the average same-category shows globally.

“It’s incredible to see how many people from all over the globe tune in to watch the adventures of Talking Tom and Friends,” said Jaka Benedičič, Senior Media Content Director. “The recent awards and achievements mean a lot to our team. We’re working hard on the upcoming pipeline of exciting new content – so watch this space!”

The beloved franchise also celebrates another impressive milestone this month, with the launch of the newest game, My Talking Tom Friends. The revolutionary new virtual pet mobile game, which is now available to download on iOS and Android, soared into the top charts for Android and iOS worldwide within days of its release. To date, the game received over 90 million downloads. Even its four trailers have had incredible success, with over 70 million views recorded in just one month.

For the chance to see what the world’s been watching, watch here.